The Motul Brand was originally founded in New York in 1853, and it initially dealt in the trade of whale oil as a fuel for lanterns. As its operations expanded into the worldwide market, Motul began exporting their lubricant products to Europe. It was at this point that a French company—Zaugg—bought out the company and moved the company’s headquarters to Paris in France and relaunched it as being a French brand. The original name of Motul was retained, however. 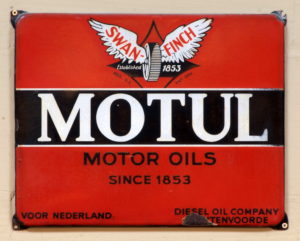 The modern Motul brand is an environmentally conscious company and it strives to reduce its carbon footprint and produce friendlier, more environmentally-friendly products wherever possible. Motul also team up on a semi-frequent basis with racing teams that specialise in endurance and lost distance racing to perfect the formulas for their oils and lubricants.

Motul 5W-40 oil is a 100% synthetic oil and engine lubricant which is intended for use in vehicles operating either a diesel or a petrol engines. Specifically, it was designed and created for use in cars that run on turbo Diesel direct injection or otherwise have a leader/unleaded gasoline engine or a high displacement engine. It is compatible for use alongside DPFs (Diesel Particulate Filters) and catalytic converters. It is categorised as a multipurpose lubricant thanks to the approvals it has received from a number of car manufacturers, including:

As the Motul 5W-40 is a fully (100%) synthetic oil, no mineral oil—ie. crude oil—-was used in its production process. Fully synthetic oils are the most recent development and were first created by Motul in 1971. The lack of cheap crude oil and the more complicated production process can make them more expensive that semi-synthetic oils or mineral oil itself, however it is a much more powerful product which offers a far superior standard of mechanical performance when compared to other varieties. Nowadays, most modern vehicles and engines will require a fully synthetic oil over a semi-synthetic or mineral version to function properly anyway.

There are a number of different places which offer the Motul 5W-40 oil online. These include:

The oil is said to be more efficient than other makes and varieties, and it has been reported that much less Motul 5W-40 oil gets consumed than with other products. Whilst other oils will often cause a huge oil buildup inside the engine, this is not seen with the Motul 5W-40. This means that, though it costs slightly more to purchase, Motul’s experience and knowledge in creating the best products proves itself by actually saving the customer money in the long term.

The oil is especially useful thanks to its multipurpose nature, with different models and makes of cars all being able to use it efficiently.

Overall, though the Motul 5W-40 oil is more expensive to purchase than other brands and makes, it can save customers money in the long term thanks to the lesser buildup inside the car’s engine. The fact that it can be used across a number of different models and makes also means that it is a highly versatile and useful product.