Any combustion engine requires engine oil to thoroughly lubricate internal components and prevent engine wear and damage from occurring.  Understanding a little bit about engine oil and its different functions and properties can help to ensure proper functional life of an engine, and avoid mechanical failures.

Engines run by compressing air and fuel together, and then igniting that air/fuel mixture to create an explosion.  All of these happens dozens of times a second, creating immense amounts of heat, force and byproducts.  Engine oil performs several different functions to keep an engine running smoothly.  First and foremost, engine oil is pumped into all of the tightly machined bearing and thrust surfaces in the engine, to prevent direct metal on metal contact.  For instance, the piston in the engine is generally connected to a crankshaft with a rod bearing.  Oil is forced onto the rod bearing surface so that when the piston rod spins on the crankshaft, the two metal surfaces can glide smoothly past each other, instead of sticking.  If there was no oil, the metal surfaces would quickly stick, become excessive hot, and fuse together or break apart. 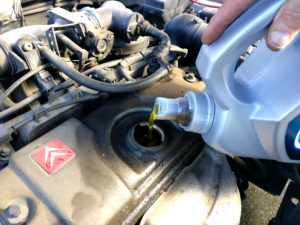 Before petroleum was discovered and refined into something we know today as engine oil, engines were fraught with problems.  They would have had to use other products, such as animal fats, in an attempt to lubricate the moving surfaces.  The animal fats and other lubricants did not have sufficient temperature resistant properties to thoroughly and effectively lubricate these surfaces.  When petroleum was discovered and started being refined into engine oils, in the mid 1800’s, this opened the door to the modern engine as we know it.

Another function of oil is to clean the internal components of the engine.  To achieve this, oil manufactures add detergents and cleaning agents to oils.  Inside an engine, gases from the combustion chamber slowly accumulate in the oil.  This can, over time, cause a buildup of sludge and deposits, which can harm the engine by reducing oil flow to critical surfaces.  The detergents and cleaners added help to prevent and breakdown the build up of these deposits in the engine.  This is a big part of why regular oil changes are so important.  The oils detergents reach a full capacity and cannot clean up the engine anymore, so it is time to change the oil.

Oil is usually made from a base petroleum stock.  This is a byproduct of crude oil refining.  From there, the oil is refined even further to create synthetic oils.  Synthetic oils are oils that have been refined to the point where the molecules are more uniform in size, which increases longevity of the oil in service life.  In addition to the base oil, the manufactures add detergents and cleans (as mentioned above), as well as viscosity modifiers to achieve the correct viscosity specification for the oil.  They may also add anti-wear additives to the oil, to increase is lubricating ability in the tight bearing surfaces inside the engine.

There is a lot to know about about engine oil. It is a critical component to our everyday life, keep cars and trucks engine running smoothly.  Now you know a little more about the history of oil, and what its made of.